In Which I Exploit Myself

It's a constant source of amazement to me that television and movies haven't come calling with their high-priced development deals, mid-priced screenwriting fees, or low-priced basic cable beer money.

But perhaps I'm aiming too high. To that end, I've compiled this list of potential direct-to-DVD exploitation titles that I'd be willing to script, for the low price of a couple of student loan payments. I think you'll agree that these are can't-miss ideas. Come on, money men! Let's talk!

Death Bear! The Bear of Death

Night of the Shabbily-Dressed Alley Stranger

The Return of the Clone of the Guy Who Cloned Himself

Gloveless Strangler (AKA The Fingerprint Killer!)

The Fondler 2: Fondled, Spindled, and Mutilated

Robo Chupacabra
Posted by Dan McCoy at 2:13 PM No comments: 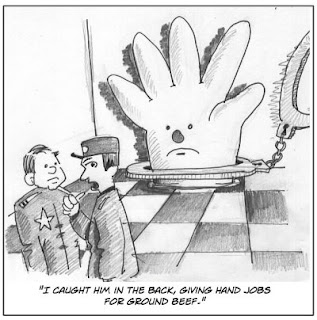 Comedian Ritch Duncan joins us to talk about "comedian" Dane Cook, and his movie Good Luck Chuck -- a poignant film about love lost, found, and crotch-biting penguins. Meanwhile Dan makes a plea for exploitation filmmakers to stick to their guns, Ritch explains when to allow a bird to ingest its own feces, and Stuart encourages our audience in an act of vandalism against video stores across the nation.

Download it here, or paste theflophouse.libsyn.com/rss into iTunes (or your favorite podcatching software) to have new episodes of The Flop House delivered to you directly, as they're released.

Two notes, one good, one bad:

The GOOD: I've discovered how to compress these files further, so that, going forward, the shows will not be monster 80 MB downloads. Sorry about the size of previous episodes. You'll note that this one, despite being nearly an hour, is a svelte 25 MB.

The BAD: This episode has an (extremely, extremely quiet, but still noticeable) constant stream of background chatter. I do not know why. Most likely, the headphones for my TV were switched on, and near the mic, while recording, so that we could not hear this ambient noise during the session, but it got picked up on the podcast. Sorry about that -- it won't happen again. In the meanwhile, why don't you pretend that you're listening to this episode on old-fashioned terrestrial radio, and what you're hearing is the next channel in the AM dial bleeding into this one. It'll make you feel like you're on a long road trip with your parents... except that your folks are inexplicably listening to three foul-mouthed guys kicking a movie while it's down. Enjoy!

In Which I Make My Yearly Oscar Picks 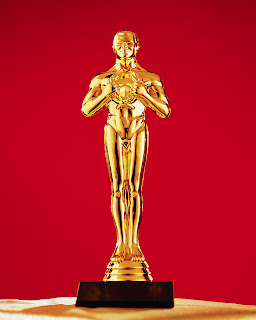 It's that time of year again, guys -- Oscar season! The magical time of year when people gather under the mistletoe to drink mulled Colombian cocaine (just like their favorite stars!); go into the woods to chop down Cuba Gooding Jr., and decorate their house with his tinsel-bestrewn body; and shave their heads and spray paint themselves gold, just like Oscar himself! Then they die, like that girl in Goldfinger.

If you're anything like me, you're about 5'11, dark-haired, and named Dan. (BWAH-HA-HA! Thanks, Academy Awards mainstay Bruce Villanch! I'll send that check to your Cayman Islands account.) And if you're anything like me, you're already making your picks for the office Oscar pool. So consider this a handy guide to the likely winners, so you can smoke that irritating secretary out of her five bucks. Just don't forget to send me my cut of your winnings! Rimshot! (Bruce, you've done it again!)

Of course, if you are anything like me, you know all this stuff already... and if you're like me, you're in the middle of writing an article about it... maybe this article.

Maybe you ARE me.

Okay, now I'm scared. I take it back. Fuck you, Villanch. Let's just get straight to the predictions.

Atonement should sweep this category, as screenwriter Christopher Hampton (Oscar nominee for Dangerous Liasons) adapted the shit out of that scene where Keira Knightly climbed out of the fountain in a clingy, wet white slip. Basically, with this, and the Uma Thurman scenes in his previous nomination, Hampton is the man to beat when it comes to high-toned literary tit-envisioning.

BEST ACTRESS IN A SUPPORTING ROLE

Cate Blanchett will win for her amazing committment to the role of Bob Dylan. Much like Robert DeNiro, who gained 80 pounds to play Jake LaMotta in Raging Bull, Blanchett put on 0.5 pounds, in the form of a working penis. She also converted to Judaism, spent years in New York as a folk singer, went electric, went through a Christian period, then did a Victoria's Secret ad. All while being kind of a dick.

BEST ACTOR IN A SUPPORTING ROLE

While Casey Affleck will pick up an Independent Spirit Award for the "Best Performance by a Supporting Actor in a Film With a Title Exceeding Nine Words in Length," Philip Seymor Hoffman will win this one for his uncanny ability to sweat on cue.

ACTRESS IN A LEADING ROLE

After reading the reviews, I'd say it's less Elizabeth: The Golden Age, and more "Elizabeth: The P-HEW-ter Age," right? (All is forgiven, Bruce!) Anyway, Ellen Page is a shoo-in in this category, because I am in love with her. Really. She's mine. Back off all you skinny-jean emo boys, or I will FUCKING CUT YOU WITH MY KNIFE. Ellen, we can be together. I feel it deep in my soul.

Odds - Seriously, back the fuck off.

ACTOR IN A LEADING ROLE

Daniel Day-Lewis will win this one, for his stirring portrayal of an innocent capitalist driven mad by society’s intolerance of men with funny voices and milkshake obsessions.

This is such a strong field that Best Picture is a tough race to call. Thus, we can only pick a winner using the traditional method. Anagrams.

Right away, Juno is disqualified for having no anagrams. Sorry, Juno! Guess like you died in childbirth! Ha ha ha ha ha! But seriously, that would be tragic.

Michael Clayton gives us “Ethnically Coma,” which seems both depressing and potentially racist, and also “Technical Loamy.” Sorry, Michael Clayton – I prefer my loam to be actual, not to skate in through a loophole.

No Country for Old Men is more promising. It renders “Nor Not Monocled Fury,” which was, I believe, the original subtitle to Edith Wharton’s The House of Mirth. Also “Unforced Nylon Motor,” which sounds like a tremendous invention.

Ultimately, however, There Will Be Blood has to emerge triumphant, on the strength of “Boobed Hitler Well.” I don’t know what it means, but I find it both horrifying and titillating. And what more can you expect from a movie?

Happy wagering!
Posted by Dan McCoy at 3:56 PM No comments:

UDCF is taking a break for Presidents' Day. In the meanwhile, take this opportunity to meditate on some of our greatest leaders' famous sayings. 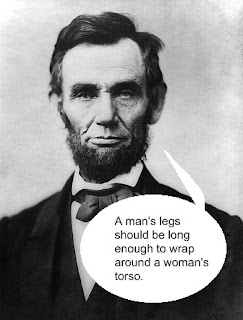 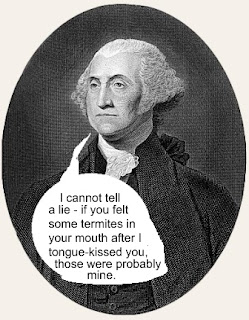 Hundreds of thousands of years ago, our forebears Fred and Wilma were trying to decide between Hilary Clinstone and Barerock Obama.

(This post is improved 100% if, after reading it, you click here [turn sound on, or wear headphones at work])
Posted by Dan McCoy at 4:51 PM 1 comment: 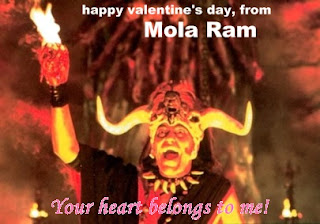 So, I drew a much nicer version of this comic, but the secretary at work threw it out, without bothering to ask whether I might need it for some reason. So here's the replacement version that I drew in approximately five minutes. If you have any problem with that, take it up with her. 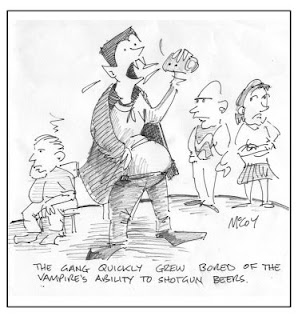 I wrote/drew my Monday comic, but then I forgot it at work, like an idiot-- and then I spent all of the evening recording my next podcast. I promise that I'll post a slightly belated comic tomorrow.
Posted by Dan McCoy at 11:33 PM No comments: 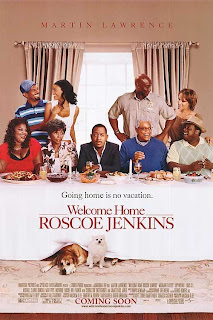 The African-American-themed remake of Welcome Home Roxy Carmichael I've been waiting for!
Posted by Dan McCoy at 9:36 AM No comments:

My Gambling Has Gotten Out of Control

It's happened again. You may remember from last year that I lost a ton of money around this time, due to some bad sports bets... specifically my bets on Puppy Bowl III. I bet the puppies wouldn't be adorable. Turns out, they were totally adorable. I bet there wouldn't be any scampering. Well, you can guess how that turned out.

Well, you might figure that, come Puppy Bowl IV, ol' Dan would've learned his lesson. And I thought I had -- I came up with a foolproof scheme. This year, I would avoid betting on the puppies entirely. No way to lose, right?

Instead, I decided to bet on the kitty halftime show.

Big mistake. I bet that the kitties wouldn't be furry and tiny and sweet as can be. 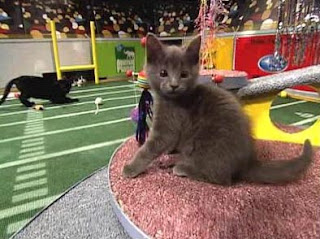 BUT THEY WERE ALL OF THOSE THINGS.

God, I'm so stupid. I thought I was being smart, spreading my money around a bit. Never put all your eggs in one basket, that's what I always say. So I bet ten grand that the kitties would be able to resist unraveling a whole ball of yarn that someone had carelessly left on the football field for some reason. BUT THEY COULDN'T. I bet twenty that they'd know better than to chase a laser pen all over the place, tripping and jumping and pouncing in the cutest way. BUT THEY DIDN'T. I put a cool fifty thou down that they'd resist scratching the scratching post, stretching their darling little bodies all the way up to the tippy top. NO DICE. I think there was some sort of cat drug inside that scratching post. Who even knew there was such a thing?

Okay, in retrospect, those may seem like bad bets. "Dan," you say, "Why on earth would you bet against a whole miniature football field full of kittens being cute?" Well, does a 1,000,000-to-1 PAYOFF mean anything to you? I took a shot. Dreamed the big dream. Sadly, it turns out those odds-makers know their business.

I just have one request. When they find me at the bottom of the east river--both kneecaps broken, after my bookie collects his debt in blood--don't blame the kittens. Their only crime was to be lovable.
Posted by Dan McCoy at 2:28 PM No comments: 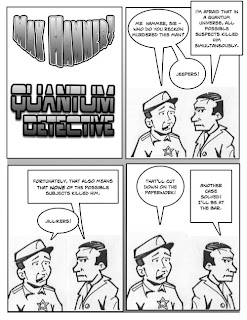