It's been a while since I've posted anything on here. I apologize. Although I don't know why I'm apologizing to you, my few readers. I have no obligation to post on my blog. I should be apologizing to me. I'm only hurting myself, since I started this blog to let people know when and where I'd be performing, or if there was a bit of my writing that I wanted to draw your attention to, or whatever. So I've failed myself. Sorry Dan.

But now I'm back. And ready to write a long blog entry with lots and lots of parentheses.

Anyway, the reason why I haven't written anything in a while, is that I'm in a period of transition. As you probably know, Sara Schaefer is Obsessed With You ended on November 11 (you can read what Sara has to say about it here). It was an awesome last show, and it was an awesome show in general. Thanks to Sara, who is one of the sweetest, funniest, all-around-best people I know, for getting me involved with it. Still, having it end has been sad, and it's sort of made me wonder what I should do next. I'm at a crossroads, if you will (if you will allow me to be pretentious, that is).

What's next for me? That's what I'm trying to decide. Recently I contributed (for the first time) a bit to Andres Du Bouchet's excellent show Giant Tuesday Night of Amazing Inventions and Also There is a Game. It went over okay, I think (at least, it didn't stick out like a sore thumb), and I hope to contribute more material to that show, whenever they'll have me (although I won't have the sort of "official" involvement that I had with SSIOWY). Jest.com doesn't appear to be updating anymore, but I hope to be involved in an all-new comedy website soon-- although I can't yet give any details. My friend Fed is planning a series of comedy podcasts, a TV series in online form, and I'm going to be one of the writers for that (and I may show up in a guest spot or two). More news on that as it develops. I'm also planning to write a screenplay, just as soon as I can figure out what I want to write about. If anyone pitches an idea to me that I decide to use, I promise to give them 1% of any money I make from the sale of said theoretical script. 1% of a likely $0.00! You can't beat that, so send those ideas in! Maybe I'll do some more stand-up. There's been some vague discussion of a sketch group with some friends of mine. And I've been taking the "Writing for The Daily Show" class over at The P.I.T. So feel free to hire me, Daily Show. But as for a solid new direction, who knows?

Anyway, in the meantime, if you're jonesing for your Dan fix, you can see me at Church Basement on December the 19th at 8 PM. I'll be delivering a couple of my high-larious essays at this bi-monthly reading series, at Mickey's Blue Room on Avenue C between 10th and 1th Streets. Also, if you want to see me at a more social, but still comedy-related, function, you can come to the party to celebrate/ mourn the sad end of Juvie Hall. It's at Slainte (directions behind the link) starting at 7 PM on December 19. You'll recognize me. I'll be the one crying into my beer.

And now, to reward you for slogging through all of that text, here are some photographs of the final Sara Schaefer is Obsessed With You, courtesy of one of my SSIOWY co-writers, the inimitable Kara Lee Burk: 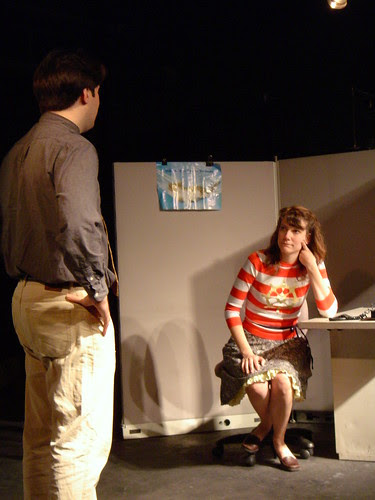 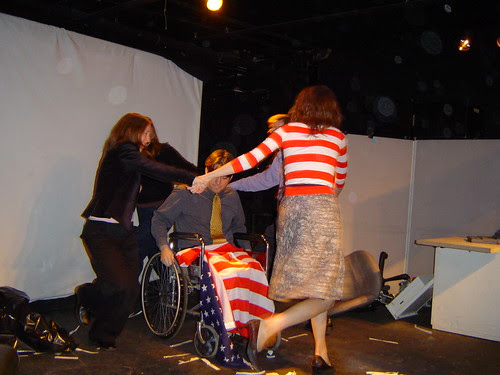 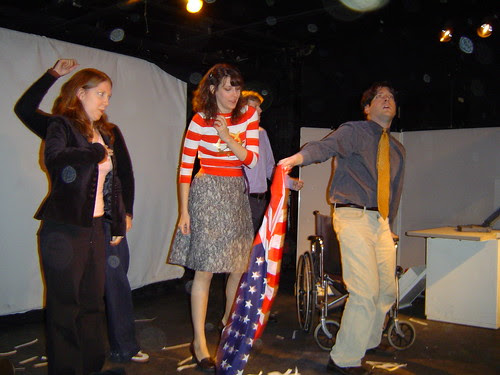 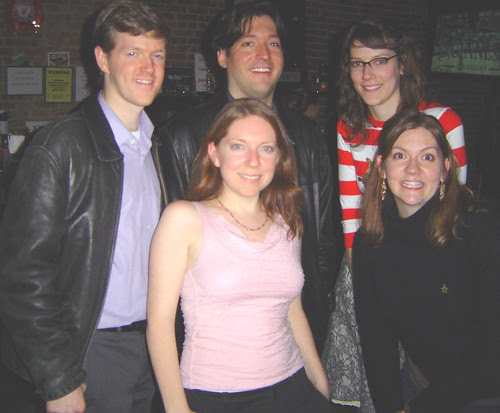 As The Apiary reported recently Sara Schaefer is Obsessed With You is soon to be no more. This Friday, November the 11th, at 8 PM, the final SSIOWY will kick off, and when it's done, that's it. After two critically acclaimed years (1/4 of which featured me) the show is done.

Why? Because all good things must eventually die, little cricket. But that doesn't make them any less sweet. Ah sweet comedy show, we hardly knew ye. Perhaps your death will fertilize the ground for many comedy shows to come.

Plus, now that Sara's married, she just can't be as obsessed with you anymore. Sorry, that's just the way things go. She's so over you. Why can't you move on?

Still, that doesn't mean that you and she can't have one last fling, for old times' sake. Snag a ticket if you can. And if they're sold out, fear not. The waiting list for SSIOWY usually gets a few extra people in the door, so if you're interested, show up at eight and slap your name on that puppy.

Meanwhile, does anyone want to give me a job? Comedy or otherwise?
Posted by Dan McCoy at 3:47 PM 1 comment: