Can a film combining a hit man, an elephant, and incredible ham Nic Cage possibly be boring? You might be surprised. Yeah. We watched Bangkok Dangerous. Meanwhile, Elliott lists some little-known mob films, Stuart admires the Sarlaac's chops, and Dan reveals the two words that will get him to see any movie.

A Portrait of the Artist as a Wicker Man 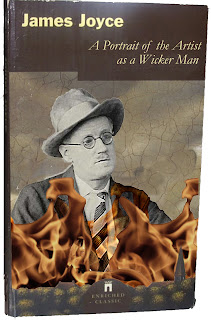 Rowan was missing, or so her mother told her, “Shh. Hide, and pretend you’re gone.” She looked at her daughter through a beekeeper’s mask.

She was Rowan. The bee flew over the island where Sister Beech lived: she sold honey.

O, I am come to the low country
Och on, och on, och rie!
Without a penny in my purse
To buy a meal for me

She sang that song. That was her song.

Over at the boarding-house, where it was the 1970’s, an earlier version of Rowan’s mother played on the piano the sailor's hornpipe and danced. In the nude she danced:

She looked a little like Brit Ekland, except for her ass, which looked kind of like a body double.

We’ll put a hive over his head
And even a bear costume
Won’t protect his eyes,

Edward Malus raged against the women of the island. “You are bloody bitches!” he yelled, “Sure as you were written by Neil LaBute!”

The flames raged higher about him, as they consumed the wicker man. “And killing me won’t bring back your fecking honey!”

The ash falling from the sky was like snow. Edward watched the flakes, silver and dark, falling obliquely against the firelight. The flakes fell general all over the island. They were falling on every part of the maypole, on the beeless hills, softly falling on the bicycle he had punched that one lady to steal. It was falling, too, upon every part of the lonely churchyard on the hill where he had thought Rowan lay buried. His soul swooned slowly as he heard the crackle of his body burning and the wicker man faintly falling, as his ash fell upon all the living and he was dead.

So I applied for a job freelancing for the ONN a while back. I didn't get it (although my friend Matt Koff did, so congratulations to him), but there were a few pitches I was pleased with (despite me having to write my entire packet in the weekend directly preceding Christmas and traveling home to Illinois). Anyway, one of them was inauguration-related, so I thought I'd post it here, since the joke will be out-of-date hereafter:

Lost MLK Speech: "I Have a Dream My Birthday Not be Overshadowed by Inauguration of First Black President."

Anyway, speaking of the inauguration, I think people are being a little hard on former president Bush, so I'd like to take a moment to offer this positive message to George: Mr. President, if you prefer, you can go ahead and let the door hit you on the the ass on your way out.

The Flop House on TruTv.com

Hey, check it out -- we got interviewed over at the TruTv.com blog (you may remember it back when it was called Court TV) about The Flop House, the bad movie podcast that's taking the world by storm. Or, at least, the basic cable website parts of the world.
Posted by Dan McCoy at 3:19 PM No comments:

I've known this for a while, but now that it's been blogged, I feel like I don't need to sit on my public congratulations any longer. Congrats to Sara Schaefer, my longtime friend and occasional colleague, on her awesome new job as head writer for Late Night With Jimmy Fallon's website. Good work, Sara. You're the best... around. (karate montage) 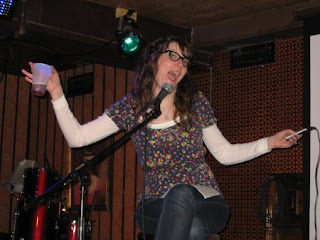 Sara dances her way into Jimmy Fallon's heart.
Posted by Dan McCoy at 9:53 AM No comments:

Come on down for some sketch comedy and cheap beer!
Posted by Dan McCoy at 1:45 PM No comments:

The Flop House Episode #29 is ONLINE!

After a holiday break, we ease into 2009 with the dance film Step Up 2: The Streets, about a girl who's a maniac, maniac on the floor. Will she dance like she's never danced before? Almost certainly. Meanwhile Stuart explains the role of texting in film titles nowadays, Elliott runs the gamut of comedy sound effects, and Dan issues a challenge to America's tweens.

Wikipedia synopsis of Step Up 2: The Streets
Posted by Dan McCoy at 1:44 PM No comments:

I had nothing to do with the production of this video, but it stars Rob Morrison (as the son) and was written by and stars Matt Koff (as the father) who are two of the writer/ performers behind Mr. Whitepants Comedy Hour, the sketch show I'm doing this Sunday at the Magnet Theater.

So think of this as an unofficial promo for the show, if you like. Otherwise, just enjoy the FRUITS of my friend Matt's labor.*