Who doesn't love to look at promotional set photos for video shoots? Especially when those photos are filled with non-celebrities? Huh? WHO DOESN'T LOVE THAT? Check out these behind the scenes pictures of my guest appearance on Escape Pod Films' episode of The Stryker Files, "Drugs."


By the way: if you watch the episode, it looks like I'm looking completely past Chris when I'm supposed to be having a conversation with him... well, that's because that's where the director told me my eye-line was. Are you trying to make a fool of me, Jeremy? WELL I WILL SEE YOU IN HELL.
Posted by Dan McCoy at 1:34 PM No comments:

Repeat Flop House offenders Gerard Butler and Katherine Heigl team up in The Ugly Truth, a terrible romantic comedy that Stuart really, really wanted us to watch for some reason. Maybe because he's just an ol' softie! Meanwhile, Elliott pitches his new hit tragicomedy "Bad Date," Stuart reveals his NBC sitcom holodeck fantasy, and Dan uses the word "whack" as in "out of whack" but is still mercilessly made fun of by his co-hosts as if he was trying to get gangsta.

Wikipedia synopsis of The Ugly Truth

Here's Stuart, so happy that The Ugly Truth is over that he's doing a dance to the credits music:

Episode Four of 9 AM Meeting, Plus a Bonus Guest Video!

9 AM Meeting extended its streak, coming in first at Channel 101 NY last night. Check out the new episode, and then go to our official site to see what you may have missed.

Also, the guys at Escape Pod Films were good enough to invite us to be guest stars on episode three of The Stryker Files (#2 at Channel 101). It was nice to step out from behind our cartoon faces for a while. See us in (live) action here:

Looking for a cool reason to brave the snow? Come to 92 Y Tribeca and vote to keep 9 AM Meeting on Channel 101. There's a great slate of shows this month, and I'll actually be appearing as a non-cartoon-actor in another show: The Stryker Files. It's a lot of fun for only $6.
Posted by Dan McCoy at 3:29 PM No comments:

I'll Bet You Didn't Know I Was a Supporting Snork 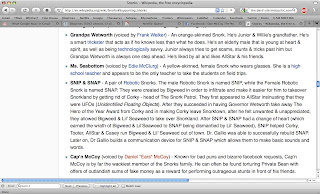 Don't hate the player; hate the game. On second thought, hate the Gamer. Meanwhile, Dan laments the downfall of the previously-dependable entertaining-trash team of Neveldine/Taylor, Matt finds his new super-muscular bête noir, and Elliott comes up with a much wackier way to end an already wacky movie.

Wikipedia synopsis of Gamer
Posted by Dan McCoy at 8:58 PM No comments: