Here's that Flop House contest entry. Get yours in before the end of October!

And here's the info for Elliott's next movie screening.
Posted by Dan McCoy at 1:12 PM No comments:

If you weren't able to attend the Channel 101 screening, then you can still see the new episode of my and Matt Koff's webseries online. (It was the number one vote getter again this month with a 96.77 / 100% share!)

You can either watch it via YouTube (below) or on the Channel 101 site (101 site might be better, since the YouTube version has a glitch I can't get rid of).

Last month, my and Matt Koff's show 9 AM Meeting was the TOP VOTE GETTER. Can we repeat? Come! See! Vote!
Posted by Dan McCoy at 10:59 AM No comments: 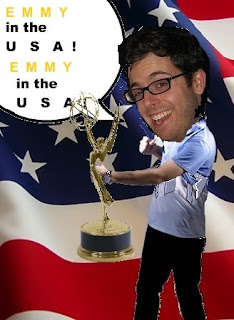 From John Hodgman's Twitter feed: "I can't believe Elliott Kalan is on stage and i'm stuck back here twittering. Revenge of the nerds indeed."

To one of my very best friends in the world, and someone just as kind as he is funny--congratulations.

A commercial for our new, more convenient web address.

Paste theflophouse.libsyn.com/rss into iTunes (or your favorite podcatching software) to have new episodes of The Flop House delivered to you directly, as they're released.
Posted by Dan McCoy at 4:28 PM No comments:

I'd like to congratulate my friend and occasional collaborator Sara Schaefer on winning an Emmy for "Outstanding Creative Achievement in Interactive Media." I've known few people who combine talent with so much drive and hustle, and you deserve every golden, pointy inch of that statuette. 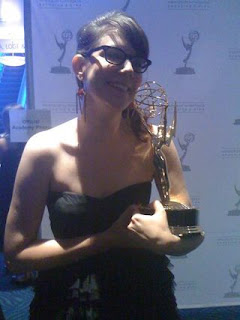 You've certainly come a long way from the days when we got blackout drunk on comically large goblets of red stuff. 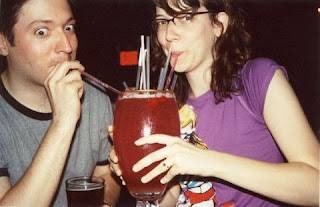 I'm kidding, of course. I meant "falling down" drunk.

Congratulations again, on your Emmy win. If anyone reading this has never gone to see Sara perform, jump on your very next chance. Just watch out when she pulls out a straw and starts eying your drink.
Posted by Dan McCoy at 4:35 PM No comments:

9 AM Meeting at the New York Television Festival

Last month, the first episode of my show 9 AM Meeting (edited/illustrated by me, written & performed by me and Matt Koff) premiered at Channel 101 and was the TOP VOTE GETTER.

This month, Channel 101 is part of the New York Television Festival, which means a bigger, cushier screening venue; more attendees; media attention and probably other exciting things that I haven't bothered to figure out. We'll be having our WORLD PREMIERE of the second episode as part of this screening (this episode is totally different than the second episode currently available on YouTube--which both Matt and I both liked, but didn't think was the strongest representation of our work to showcase in the festival. So if you've seen that one, this one will STILL BE ALL NEW).

If you're unfamiliar with the Channel 101 concept, then this explaination, stolen wholesale from their website, should help:

"Every month, five-minute TV shows are screened for a live audience in New York City. The audience votes to renew some shows and cancel others. The top five shows become the new "prime time" lineup; losing shows are banished forever. The next month, prime time shows return with new episodes, pitted against each other and a crop of fresh new pilots."

So, clearly it's in our interest to encourage you to come out and vote for our show--but don't worry, they've smartly arranged it so that it's not just a numbers game. Each voter marks down their top FIVE shows, so people can shill for their friends, but merit still rules the day.

If you want to come, the show is FREE, but you'll probably want to reserve tickets online to ensure that you have a seat. There's a nominal $3.50 fee for reserving online, but that fee is per reservation, NOT per person, so if you get together with other people to reserve a block, you're still only paying $3.50 in total. One thing to note (if I'm reading my own reservation confirmation correctly, and I may not be), you need to pick up will call tickets by 6.
Posted by Dan McCoy at 1:54 PM No comments:

Sometimes you eat the Skinwalker, and sometimes the Skinwalker eats you. For our first ever five man podcast, we bring in some experts -- specifically, the authors of the book The Werewolf's Guide to Life: A Manual for the Newly-Bitten (available for purchase Tuesday, September 15) Bob Powers and Ritch Duncan. Perhaps they'll be able to explain this Navajo werewolf opus. Meanwhile, Dan is uncharacteristically lewd, Elliott reveals his unexpected martial arts skills, and Stuart discloses his secret identity as a vigilante stripper.

If you've recently been bitten by something suspiciously large and hairy, you may want to purchase Ritch and Bob's book:

And read their WEREWOLF BLOG.

You also may be interested in some of Bob's solo books:

You Are a Miserable Excuse for a Hero!: Book One in the Just Make a Choice! Series

Or, if you want something you can surreptitiously read at work, then why not follow Ritch's blogging at TruTv.com?

And we leave you with this short video, starring Mr. Duncan:

More letters from our loyal listeners.

Paste theflophouse.libsyn.com/rss into iTunes (or your favorite podcatching software) to have new episodes of The Flop House delivered to you directly, as they're released.
Posted by Dan McCoy at 1:16 PM No comments:

Combine the number-based thrills of The Number 23 with the Nicholas-Cage-sees-the-future thrills of Next and what do you get? We discuss Knowing. Meanwhile Dan reveals his competing film "Number Quest," Stuart reveals his knowledge of afterlife mythologies, and Elliott reveals the Egypt-born, Australian-raised Alex Proyas' surprisingly French accent.

More information about the Elliott-hosted screening of Love Me Tonight.

If you enjoyed Stu and Elliott's discussion of the imaginary Drew Struzan poster for Dan's re-imagining of Knowing, "Number Quest," you may enjoy this blog post about Mr. Struzan's lesser-known work.
Posted by Dan McCoy at 1:15 PM No comments: