Captains in Space on the Radio Tonight! 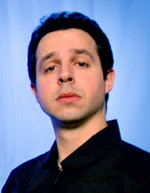 Mr. Federico Hatoum Esq., A.K.A. Captain Fed A.K.A. producer/co-director/editor/special effects supervisor for Captains in Space will be on East Village Radio show Fist City tonight at 9, to discuss the series. (If you want to be sure not to miss it, subscribe to the podcast feed.) Yes, a podcast being discussed on an Internet radio show that is also a podcast. Your computer may explode with the insignificance. Was Fed booked simply because the hosts of Fist City make a cameo appearance in the latest episode? You'll have to listen to find out!*


*Actually, you could probably just guess the answer.
Posted by Dan McCoy at 10:40 AM No comments:

Well. Insomuch as I won Daniel Radosh's New Yorker Anti Caption Contest this week. I'm not exactly proud of the winning caption, y'understand. The joke's kind of horrible. But remember, the point of the contest is to think up the worst possible caption for the cartoon. You have been duly disclaimed.
Posted by Dan McCoy at 3:41 PM No comments:

I Was on Internet Radio Last Night

I was remiss in drawing attention to this, other than a mention in the upcoming shows sidebar, but I was on Elliott Kalan and Brock Mahan's East Village Radio show/ podcast Fist City last night, explaining the gospel according to Slylock Fox. If you want to catch up, you can listen to the most recent episode here. Or, if you subscribe to the podcast, check out the 8/23/07 show.

Fist City comes on at approximately the 1 hour mark, and my bit is around 1:45. Woo!
Posted by Dan McCoy at 1:04 PM No comments:

So... what's new with you? Nothing? That's cool. Me? Well I'VE STARTED A PODCAST.

Yeah, sure, Captains in Space is technically a video podcast, but this is the first podcast that I'm personally producing. And it's free of all those pesky "pictures," which makes it all the easier to enjoy in a crowded subway, or while driving your car.

What's the podcast? It's called The Flop House. What's it about? It's about me and my friends Simon Fisher and Stuart Wellington getting together, having a drink or two, watching a bad movie (usually one released in the last few years), and then discussing it. And you get to listen. What fun for you! What could be more exciting than three dudes rambling into a cheap microphone? (Speaking of which, I apologize for the questionable audio quality of this first installment - I learned a lot producing and editing it, which will be applied to all future recordings).

What's on tap for the first episode? Let's read from the official Flop House blog:

The Flop House: Episode One - Stealth

Also, the gang recommends a few things that don't suck.

Look for new episodes bimonthly (although the second one may be slightly delayed due to a Stuart business trip). To subscribe to have new episodes delivered directly to you as they're released, paste theflophouse.libsyn.com/rss into iTunes, or your favorite podcatching software.

The super-geniuses behind the Flop House.
Posted by Dan McCoy at 12:30 AM No comments:

The Worst in a Long Line of Bad Business Decisions

Good luck with your comically outmoded business model, AOL.
Posted by Dan McCoy at 10:46 AM No comments:

Sure it's been a while. Okay, 11 months to be exact. I could explain why it took so long for the newest episode to come out... but, honestly, it's boring. Wouldn't you rather be using that valuable time watching the latest episode of Captains in Space? Just think of us as if we're a BBC show or something, where you're lucky if you even get six episodes total.

The latest episode, Beauty, is our biggest and most complex yet, with seven speaking parts, and the cutting-edge Lost in Space-quality special effects you've come to expect from Captains in Space.

Download the high-quality video file here, or subscribe to the iTunes podcast feed to have it delivered to your computer to import to your video iPod. (Ooh! Portable! Show it to all your friends!)

Items for Sale in the Back of "Hi-Lo There! The Hi and Lois Collector's Fanzine," Issue 103