If You're Bored of Me

It's not personal news, but I wanted to give a couple of plugs to some certified F.O.D.'s.

First off, if you're in NYC, you should pick up a copy of Metro, one of the many free dailies that accompany bored subway riders on their daily commutes. Why? (Other than the thrilling expose on how men want to sleep with Jessica Alba?) Because Elliot Kalan, associate producer on The Daily Show and host of The New Kalan Show (formerly "The Midnight Kalan," on which I had the pleasure of appearing, for the "Night of Stallone" show) is now contributing a weekly column. And today is the kick-off piece. According to insider sources (read: Elliott), the column should appear every Friday hereafter. So rejoice, commuters! Three minutes of your day just got a lot more interesting!

Also: what has Sara Schaefer been doing, since the shuttering of Sara Schaefer is Obsessed With You? She's been doing some solo performances around the city (the SSIOWY staff got together for a mini-reunion to enjoy her act at Variety Underground a couple of weeks ago). I'd like to highlight one particular performance: her upcoming appearance at The Rejection Show.

Sara will be presenting a rejected Channel 102 pilot, which, as a bonus for the Whither Laffs reader, features about 30 seconds of me. See the music video where I took an ostensibly comedic pratfall, the scar from which I can still see on my shoulder.

Hooray for friends. Woo woo.
Posted by Dan McCoy at 10:30 AM No comments:

"Update, or: In Which I, Your Humble Host, Hit You Over the Head with a Four-by-Four"

As promised, here is the information about my appearance on Saturday:

Eric Zuckerman and I will be hosting 4x4, a series of four ten-minute comic plays (why that doesn't make it 4x10, god only knows), at the Gotham City Improv.

Mr. Z and I will be hosting as Caine and Hoskins-- meaning that I will be doing my inimitable Michael Caine impression and Zuckerman will be doing his incredible Bob Hoskins impression... which got me to thinking: have these two Cockeney acting titans ever done a movie together? And if not, some producer needs to get the two of them together IMMEDIATELY. It turns out that they have done one film together, Neil Jordan's 1986 British gangster-romance, "Mona Lisa." But they were hardly co-stars. I was thinking something more on the order of this: 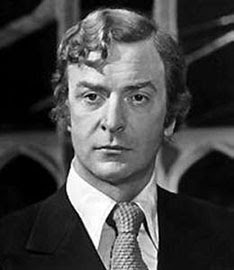 In the Bleak Midwinter

Well, it's been a while since I've updated this thing, and that's not because I've forgotten you, dear reader (how could I ever forget YOU?), but because there's not much that's been going on. I've allowed myself to succumb to post-holiday laziness. However, things should be picking up from here, and if you've been jonesing for some Dan-related comedy (which puts you in about the one-millionth of one percent of the population-- although, luckily, most of that percentage knows about this calendar/ blog), then you're in luck.

Yes, in my first performance since 2005, I will be appearing this Saturday evening from 8:30-9:30, co-hosting a slate of four ten-minute plays... the perfect length for a play, in my easily-distracted opinion. My partner in this endeavor will be one Mr. Eric Zuckerman, whom you may know as "Doomsday Guy" from the 4th highest-grossing film of the year*, War of the Worlds. That's right. I'll be sharing the stage with someone who has recieved valuable direction from Mr. Steven Spielberg himself-- direction that possibly included, "Look over there," and, "Louder."

I don't know all the details just yet (Mr. Z is running point on this operation and he has yet to apprise me of all the ins and outs) but I wanted to warn you immediately, in case you needed to clear your already sparse Saturday-evening calendar. As soon as I know all the salient information, I'll post it right here.

In other news, following my semi-award winning TV spec scripts that have completely failed to win me an agent as of yet, I've decided to write a screenplay. Just as soon as I, y'know... figure out how to do that.

Also, production is underway on multiple episodes of the video podcast "Captains," mentioned in the link bar to the right of your screen. It's a little comedy sci/fi series being put together by my friend Fed, his friend Adam, Mr. Devon T. Coleman, and yours truly. I'll give you more details as production progresses, but we're hoping that the first episode might be available by late February or early March, at which point the aforementioned link will become active, and the wealthy among you can enjoy our shenanigans via your video iPod, the middle class can enjoy our shenanigans via your computers' Quicktime video programs, and the poor can enjoy distorted re-tellings of our shenanigans while huddled around the Tang-cooler.

In other news, I am irredemably self-obsessed.

*According to the Entertainment Weekly I read on the subway this morning.
Posted by Dan McCoy at 10:56 AM No comments:

So I sent some pitches to MAD Magazine a while back, one of which they liked; and I did a little back and forth with them on a couple of drafts. Anyway, ultimately they decided that they didn't want to use the piece, but they liked what I'd done and wanted to give me something for my work, so they're going to pay me a $100 "kill fee." Cool. This is the first time I've been paid for writing something that didn't get published (well, that's not true-- I think Jest may have paid me for a piece that didn't get published because they folded before they could use it, but at least they intended to use it). Anyway, what a cool move on MAD Magazine's part. And I'm still hoping to write something sometime that they'll actually print, so stay tuned.

I was going to make a joke about never getting paid for nothing before... but, sadly, I'm familiar with the joys of unemployment checks. All things considered, I'd rather be paid to not get published.
Posted by Dan McCoy at 7:15 PM No comments: