I've not been doing a lot of live comedy for a while, partly because I've been working on a screenplay (sure to remain unpurchased and unproduced), and partly because a few long-running projects I was a part of came to an end, and I never took the initiative to come up with replacements.

However, starting in May, I'll be part of a regular show again. And, based on the concept and the other people involved, I'm very excited.

Every Monday, starting on May 21st (skipping May 28th, Memorial Day) I'll be doing a new show called The 8-Track, at 49 Bleecker St., between Lafayette and Mulberry (formerly the Culture Project theater). It will consist of 8 musical performances and 8 comedy performances woven seamlessly into one another, much like a DJ set, or a mix tape. The show will be all-new every week, and each show will feature a guest host and guest musicians, in addition to the usual sketch performers.

The show is produced by Chris "Shockwave" Sullivan, of the improv hip-hop group Freestyle Love Supreme, which has been featured at the Aspen Comedy Festival and the Edinburgh Fringe Festival. The head writer is Erik Marcisak, named a Back Stage Comedy Best Bet in 2006 and the former manager of Juvie Hall, an Emerging Comics of New York winner for Best Venue in 2005. The director (at least for the first several shows-- this will likely rotate) will be A.J. Morales, winner of the ECNY award for Best Director in 2005, and the founder/director of The Wicked Wicked Hammerkatz which also won a ECNY award, was a Del Close Marathon selection, etc. etc. etc.

These are good folks.

My place in the show will primarily be on the writer's side, but I should also be appearing as a performer for one reoccuring segment.

More than that I cannot say, partly because I don't know how much I should spill at these formative stages (the show will effectively be "in previews" for the summer, as we discover more about the shape it will take and work out the technical niceties), and partly because I don't know much more at this point. But I wanted to let folks know what I could, because I believe this could be something great. I hope you can make it out to see for yourself, and I'll keep you posted as I get more specifc details regarding our debut.
Posted by Dan McCoy at 4:35 PM No comments:

I am, again, a finalist in Daniel Radosh's weekly New Yorker Anti Caption Contest, the goal of which is to "submit the worst possible caption."

The comic, and my caption:

Animal activists in Serbia are upset by a plan to sedate more than 300 horses stabled at Belgrade's racecourse to keep them calm during a Rolling Stones concert, especially in light of Mick Jagger’s well-publicized claim that wild horses couldn’t drag him away.

This weekend is the White House Correspondents' Association dinner, and Rich Little has been hired to perform. Unfortunately for the White House, he’ll be doing his impression of Steven Colbert.

A 2 and 1/3 inch Faberge chair sold for 2.28 million dollars at Sotheby's on Tuesday, leading onlookers to exclaim, “Man that is one rich mouse.”

A New York City planning subcommittee has opposed a permit for the annual San Gennaro Festival in Little Italy, saying the street fair is too raucous and an inconvenience for residents. Citing similar reasons, the committee also denied a permit to New York City.

A new trend in New York City are "Cuddle Parties," which are drug and alcohol free environments where people meet to explore communication, boundaries, intimacy and nonsexual touch, creating a sensitive new way for guys to get blue balls.

A new fragrance will launched this summer called Coney Island, and will have a combination of smells, including Margarita mix, tequila, chocolate, and caramel, recreating the authentic experience of falling into a real Coney Island dumpster.

An Australian man spent 13 days living underwater in a "biosub," which created oxygen for him from algae that was watered with his recycled urine, and was powered by an exercise bike, which, experts agree, is the best way to smell like urine-soaked algae.

According to a report on global warming by the Intergovernmental Panel on Climate Change, the biggest threat to New York City is increased risk of floods, power outages, and being crushed by falling air conditioners.

Plans are underway for a Spider-Man musical on Broadway, with Julie Taymor from the Lion King set to direct and music by Bono and the Edge. A warning to those in the front row: you will get webbed.
Posted by Dan McCoy at 3:12 PM No comments:

The former home of Johnny Cash, which is now owned by Barry Gibb of the Bee Gees, burned to the ground Tuesday afternoon after a spark ignited a wood preservative applied to the interior of the lakeside house, leading to a fistfight in the New York Post offices, over whether they should go with the headline “Ring of Fire” or “Disco Inferno.”

Don Imus on Thursday raised nearly 1 million dollars for various charities in the first five hours of his annual radio fundraiser, although few believed him when he claimed the phrase “nappy headed ho’s” actually referred to his charity work with narcoleptic hookers.

A new theme park in England has opened called Dickens World, which dedicated to the author Charles Dickens. It’s no relation to the Dickens World in Amsterdam, which is dedicated to… other things.

Starting Wednesday, Russia refused to renew the licenses of the last two adoption agencies operating there, effectively preventing Americans from adopting Russian children, although you can still pick them out of a catalogue and marry them.

The North Carolina State Attorney General on Wednesday criticized the "rogue" district attorney who prosecuted the false rape charges against the Duke Lacrosse players, while Jerry Bruckheimer heard the phrase “rogue district attorney” and immediately put a script into development.

IRS officials said this week that Singer Marc Anthony must pay 2.5 million dollars in back taxes or face prosecution, although he has been cleared of regicide in that Julius Ceasar matter.
Posted by Dan McCoy at 10:24 AM No comments:

In Which I Present a Long-Lost Movie Tie-In 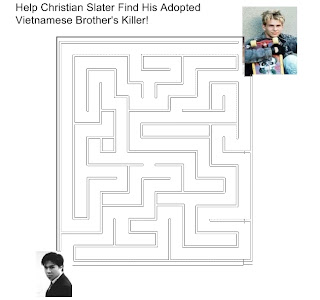 Below are several participle-based movie titles. Can you circle the ones that aren't real?
What Are Some Other Things You Might Like to Gleam?
Write your answers below: 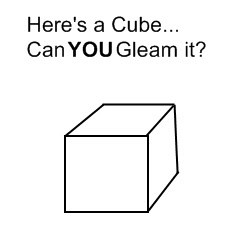 In Which I Show No Respect for the Recently Deceased

So, Johnny Hart died this Saturday. Too bad-- if he'd managed to kick it one day earlier, on Good Friday, maybe he would've risen again on Sunday.

Look, all I know is, if you can convert a bunch of cavemen to a religion that didn't exist until 350,000 years later, you must be some sort of powerful wizard. A Wizard... of Id, if you will.

Okay, I realize these jokes aren't funny, but then again, that makes them perfect for Johnny Hart. 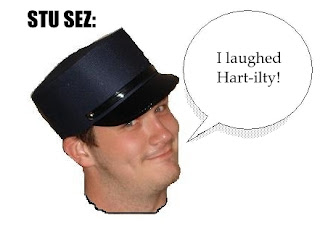 In Which I Pick Up an Important Endorsement 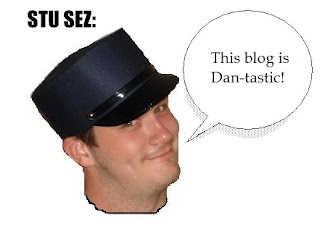 Everyone's Working for Me

A while back I shot something for Sara Schaefer's AOL music and comedy show "The DL," and today they posted it online, so that all could enjoy my stiff acting and surprisingly large number of chins. Since it's somewhat office-themed, and it features the back of Sara's head in one shot, this is probably the closest fans of Sara Schaefer is Obsessed With You are gonna get to a reunion. So lap it up:

A guest writing spot in Gawker two weeks ago... a starring role in a two minute AOL video today. I know what you're thinking-- I've sold out. Gone all corporate. Well, guess what? I didn't get paid for either! HA! What do you think of me now?!

Hmn... Perhaps I need an agent.

DVD commentary extra: I ad libbed the line "You're next." Yeah, that's just how a brilliant comedy mind works.
Posted by Dan McCoy at 12:47 PM 1 comment:

In Which I List Several Thoughts Suggested to Me, by Seeing a "Freelancers Union" Advertisement on the Subway This Morning 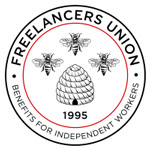