It's Not Even 2008 Yet, and the Smears Have Already Begun!

Then again, look at the shocking photo of Mr. Duncan we had our archivist dig up... 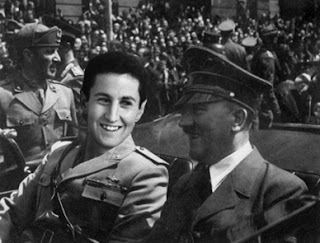 It was announced that the hit show Queer Eye for the Straight Guy will end production after the fifth season ends this summer. Now if five gay men break into your house, it just means the Village People need a little Quaalude money.

Officials at the Chimp Haven in the Shreveport, Louisiana zoo were surprised when a female chimpanzee gave birth, despite the fact that the facility's entire male population has had vasectomies. Could this be the long-foretold birth of Chimp Jesus?

DEA agents said Tuesday that they have dismantled a Colombian heroin ring by arresting several couriers who stitched packets of drugs into their pants and then took cruise ships to the US. In short: there was a party in their pants, and everyone was indicted.

On Tuesday Donald Trump got a star on the Hollywood Walk of Fame, followed by a star-studded night of celebrity corpses rolling over in their graves.

It is rumored that Matthew McConaughey will play Magnum PI in a movie version of the hit TV show, and is looking forward to making good on his many mustache ride promises.

On Tuesday Apple unveiled its iPhone, which is a new touch-screen cell-phone that contains an iPod, OS X operating system, Wi-Fi connection, camera, can play full screen video, and can urinate on a Microsoft Zune from up to 60 feet.

Paris Hilton pleaded not guilty on Tuesday to DUI charges in Los Angeles, although she still has an outstanding IUD record, in all fifty states.

Former revolutionary Daniel Ortega, who was one of Washington's most bitter foes, was sworn in as President of Nicaragua on Wednesday. In response, President Bush said he was unconcerned, as he had heard that Ortega was both thick and chunky.

The body of the late James Brown has yet to be buried as attorneys and his children work to settle issues surrounding his estate, and the audience waits, hoping that his cape will magically revive him.

Duke University's applications for admission declined over 4 percent from a record last year in the aftermath of rape charges against members of the school's lacrosse team. Also not helping: their new Fitness Complex and Rapetorium.

The Transportation Security Administration will now allow companies to sell ads inside plastic bins whose sole purpose so far has been to move passengers' belongings through X-ray machines. A TSA administrator said, “We believe that ad agencies won’t be able to resist this opportunity to associate their products with shoelessness and frustration.”

A new political battle started this week over the terms used to describe the additional troops being sent to Iraq, with the President calling it a "surge" and Democrats calling it an "escalation." Whereas Iraqis call it, “Thursday.”

The Habsburg family said Wednesday that it wanted to sell a Transylvanian castle famous for its connections to Vlad the Impaler, who was the inspiration for Dracula, for 78 million dollars, or to the first person to spend a night in the castle alone.

A former Colorado high school basketball coach is facing 39 charges of allegedly hitting male students in the groin, showing them pornography, and pouring water on his players then driving them to games in the winter with the windows down. His heartwarming story will be told in the upcoming film “Abusiers.”

It was revealed this week that the late Law and Order actor, Jerry Orbach, donated his eyes after his death to two women who needed new corneas, which explains why, when confronted with a corpse, they now feel compelled to make a wisecrack.
Posted by Dan McCoy at 1:34 PM No comments:

Hey, I'm one of the runners-up this week, over at Daniel Radosh's New Yorker Anti-Caption Contest.
Posted by Dan McCoy at 1:30 PM No comments:

Publications Running Humor Pieces That Are Slightly More Funny Than The New Yorker's, but Are Also More Precious and Irritating

McSweeney's
Posted by Dan McCoy at 3:28 PM No comments:

Why Yes, I Was in a Music Video (Updated)

Updated: the original YouTube video was extra fuzzy for some reason, but the problem has since been fixed.
--

Way back in the summer, videographer/ rapper extraordinare John Kingman put together this music video for Sara Schaefer's smash UCBT show, Video Gaga. Check me out in a featured cameo as John's hot dog eating coach.

Because of some technical difficulties, John couldn't get it up on YouTube until now, but that just means that you have one more thing to brighten up your dark winter months.

By the way, if the embedded video doesn't load, try this link: Lips & A**holes, by Colonel Bastard. The rapper, not the band. Oh, and another of John's music videos (sadly Dan-free as it may be) can be found here.
Posted by Dan McCoy at 3:17 PM No comments:

I Did Something Very Vague and TV-Related Last Night

So I can't get into details or I might get in trouble, but I shot a minor role in a hidden-camera-type TV pilot last night. Thanks be to one of my old comedy cohorts for getting me the gig. As I said, details are verboten, but my friend said that I could probably mention it as long as I'm "very vague." Since I'm currently a little hard-up for news for this site, consider this my very own Page Six blind item.

Anyway, if the pilot sees air, I will definitely let everyone know when and where they can see it. Watch this space.
Posted by Dan McCoy at 11:16 AM 3 comments:

I Like to Deliver My Messages in Hat Form 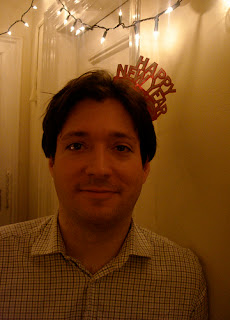