In our least-edited show yet, we discover that big stars, glossy production values, and a classic story can't save you from being snatch'd by the Flop House, as we discuss The Invasion. Meanwhile, Elliott tries to sell us on his medical humor, Stuart imagines the sassy sentient skateboard of his dreams, and Dan auditions for several other podcasts.

CORRECTION: Dan says in the podcast that he may be wrong about the original director of The Invasion being the person who directed Kontroll. Indeed he is. The original director was Oliver Hirschbiegel who did Das Experiment and the Academy Award-nominated Downfall. Dan apologizes for his Amero-centrism/ mixing up his German and Hungarian directors.

Hey, if you haven't gotten the message by now, new microphones! If the sound quality of the earlier shows have been holding you back, now's your time to jump in again. And tell your friends!

Wikipedia synopsis of Invasion.
Posted by Dan McCoy at 7:59 PM No comments: 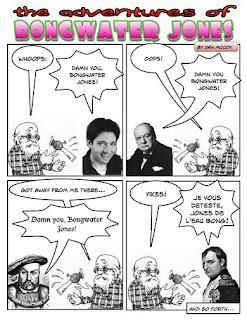 In the second of our short, supplemental episodes, noted raconteur Stuart Wellington describes his encounter with noted werewolf-hunter Kate Beckinsale.

Paste theflophouse.libsyn.com/rss into iTunes (or your favorite podcatching software) to have new episodes of The Flop House delivered to you directly, as they're released.
Posted by Dan McCoy at 8:43 PM No comments:

You may have noticed that Unca Dan's Comical Funnies were on St. Patrick's Day break yesterday. We will be back next week with new comic goodness. In the meantime, we hope you had a pleasant holiday watching Leprechaun in Da Hood.
Posted by Dan McCoy at 10:10 PM No comments:

Jessica Alba and Hayden Christensen apply all of their Flop House star power to Awake, a strangely sedate thriller about a man who spends much of the movie paralyzed. Then dead. But don't worry; it has a happy ending. Meanwhile, Elliott takes our very first caller, Dan admires the bravery of Sean Connery's Medicine Man, and Stu introduces the review sensation that's sweeping the nation.

Hey, if you haven't gotten the message by now, new microphones! If the sound quality of the earlier shows have been holding you back, now's your time to jump in again. And tell your friends.

And lastly, SHINY NEW FLOPHOUSE LOGO! Thanks to John McCoy for designing it for us.

Wikipedia synopsis of Awake.
Posted by Dan McCoy at 12:43 PM No comments: 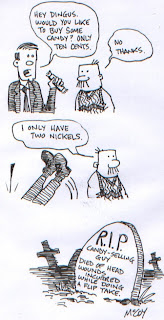 Like everyone in New York, I was excited to see what headlines the tabloids would use for the Elliott Spitzer prostitution scandal. Yet I was disappointed when the best the Daily News could come up with, was:

Really, Daily News? I mean, aside from barely making any sense (it sounds like the hookers were paying him and I sincerely doubt Spitzer's that great a lay) the best you could do was to shorten governor and rhyme it with "luv?" This looks like something you'd find in a Valentine's Day Candy Heart Scandal-Pak. Where's the elan? The ribald puns? The ugly joy of a conservative rag reveling in the fall of a democratic governor? Surely the New York Post wouldn't let me down!

Yes, that's what they came up with. Ho no. It's not without its pithy charms. It has some of the punning, unseemly enthusiasm I'm looking for. But come on! This is a major sex scandal featuring the governor of our home state! Let's get it together, New York tabloids! How about something like...

*this would also be the Daily Variety headline.

Then again, they could go with something a little more subtle... 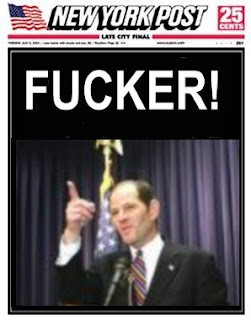 Will be up tomorrow, for the simple reason that I forgot about it.
Posted by Dan McCoy at 11:22 PM No comments:

We're going to start producing short, supplemental episodes to put out in weeks without a full-length Flop House, so that listeners don't have to wait quite so long for new content. In this first episode, Dan addresses some of the material lost (thanks to technical difficulties) from the Awards Floptacular episode.

We hope you like the new Movie Minute supplements. Thanks for listening.
Posted by Dan McCoy at 3:24 PM No comments:

Special guest Elliott Kalan returns to discuss what has been called "The Academy Awards of movies," the Oscars. Meanwhile, Stuart hands out tips about the Internet, Dan learns what it means to be a really unlikely stripper, and Elliott fears running afoul of Wayne Enterprises.

0:00 - 0:33 Introduction and theme.
0:34 - 31:49 Welcoming special guest host, Elliott Kalan (segment producer, The Daily Show; humor columnist, Metro), and discussion of the 80th annual Academy Awards.
31:50 - 39:30 Elliott discusses his own experiences helping to produce the 2006 Oscars telecast, and Dan tries to jump in with his own shameless name-dropping.
39:31 - 43:15 We discuss the Razzies, which, coincidentally, was dominated by the film we watched the last time Elliott guest hosted.
43:16 - 45:51 We get bored talking about the Razzies and drift back to the Oscars.
45:52 - 46:39 Dan's cursed laptop provides the show with a shocking twist ending. Also, podcasty business is briefly addressed.
46:40 - 47:26 End theme and outtakes. 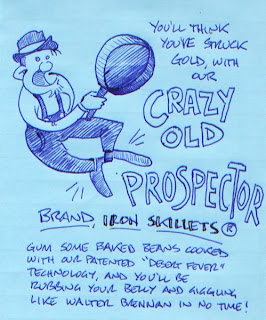